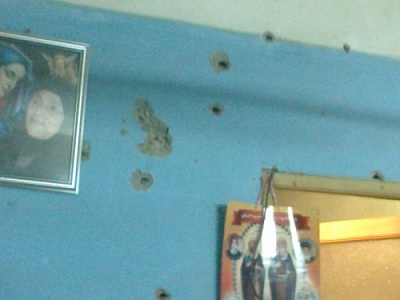 (AINA) -- Ali Hussein, a 35-year-old Muslim gang leader, entered the home of a Coptic Christian family in the village of Abdelmassih in Deir Mawas on at 7 A.M. on Sunday and demanded that Hiyam Zaki Zaher, the 25 year old mother of two children, come live with him. Ali Hussein was accompanied by his two brothers, both ex-convicts. Two weeks before Ali Hussein told the Marzouk family that he would either take the woman or they would have to pay him 1,000,000 Egyptian pounds.

"The family managed to get Hiyam out of the village one day before Ali Hussein came to their house," said Roshdy Ibrahim, a relative of the Marzouk family. He said that when Hussein went into the home he was met by 24-year-old family member Ephrem, a university graduate, who rejected his demand, upon which Hussein shot him twice, killing him instantly. Roushdy said that Hussein had instructed 120 of his men to wait outside and come in and start shooting if they heard gunfire.

After the shooting of Ephrem the gang broke into the house. They encountered the father, 61 year-old Ibrahim Marzouk, a retired village bank manager, and killed him. They shot everywhere, wounding another three family members on the roof. Although Hussein was also killed under the hail of bullets, it is not clear who shot him. 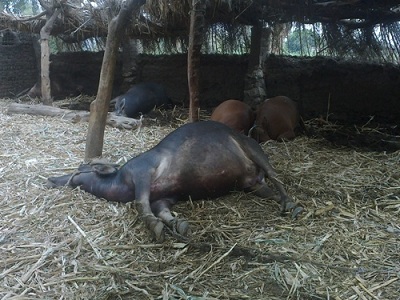 To terrorize the inhabitants of the village, before the Muslim gang went into the Marzouk home they went to the stables and killed all the animals.

The body of Hussein was removed from the scene to the morgue in Mallawi General Hospital amid tight security as a large number of Salafis and his supporters surrounded the hospital and demanded revenge for the Christian killing of a Muslim man. The Muslims chanted that Hussein is "the beloved of the Prophet."

The body of Coptic Ibrahim Marzouk and his son Ephrem was kept at Deir Mawas hospital for security reasons, and was buried after the funeral church service on Sunday amid tight security. Thousands of Copts from all neighboring villages attended that burial. According to a Christian Dogma News reporter from Deir Mawas, Hussein's supporters threatened the Copts, telling them not to bury the two dead men "otherwise they would all be buried with them."

Even after the death of Ali Hussein, who had terrorized the Copts in the area since January 2011, raping women, kidnapping children for ransom and demanding extortion money (AINA 4-6-2011), nearly 9000 Copts are still living in terror because of the threats of revenge from his nearly 300-man strong gang, his two brothers and Salafist Muslims who are angry at the killing of a Muslim by a Christian. Copts have asked for police protection.

Enraged Copts blame the police for conspiring with Ali Hussein and his gang, by arriving 9 hours after the villagers asked for police help and 4 hours after the Awlad Marzouk crime took place.

Reda Marzouk, a relative of the Christian victims, blamed security for failing to protect them and all Christians, because Hussein started seizing the homes and property of Christian in the villages of Deir Mawas in Minya and took control over other villages such as Awlad Marzouk without resistance from the authorities. "He was so emboldened so as to go and ask for a Christian woman to sexually abuse her, which led to the bloody events of Sunday," wrote activist Nader Shukry, who first broke the story of the gang leader in 2011.

Ali Hussein was reported to the Attorney General last year by rights groups and several times to the police without any success. He used force to make his Coptic victims withdraw their complaints against him.