Urgent Messages to the Muslim World

The first reaction of the U.S. after 9/11 should have been to stop visas from all majority-Muslim countries, except for those of utmost importance. But our politicians' hands were tied -- not by fear of a backlash from Islamic countries, which probably expected a U.S. boycott, but by fear of a backlash from the Western media and Western progressives.

The decision to keep Muslims, refugees and others pouring into the US after 9/11 was wrong and has not done Islam and Muslim reformers a favor. Here is why:

The chaos and bloodshed in the Muslim world, even in the most moderate of Muslim nations, such as Turkey, is between Muslims who want to enforce Islamic sharia law, totally and upon everyone by a theocratic government, and those who want less sharia by installing military rule. The West does not understand that the only form of government that can stand up to a totalitarian Islamic theocracy is a military one and no other. Who could imagine that a militaryjunta could be considered the only savior from Islamic tyrannies that require everyone to live totally, 100%, under the laws of sharia? 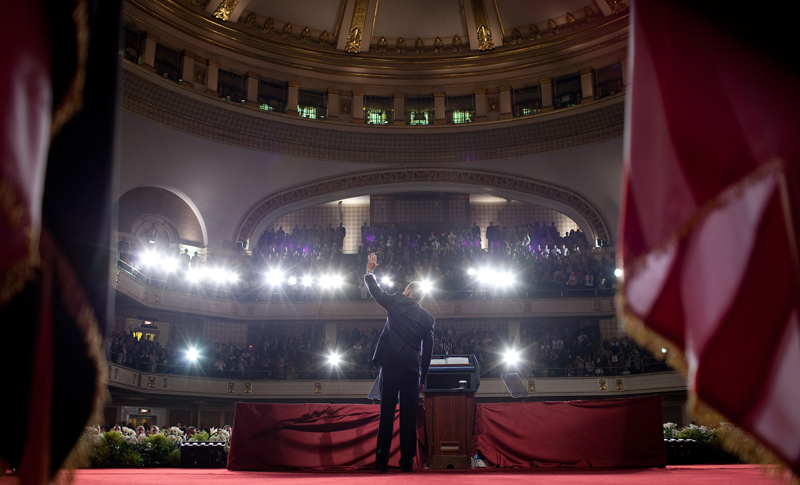 When former U.S. President Barack Obama gave his first major Presidential speech in Cairo, in 2009, his guests of honor in the first rows were leaders of the Muslim Brotherhood. The less-radical Islamist military form of governments in the Middle East were left out and thus weakened. (Image source: White House)

Now, another, dangerous, message is being sent to the ordinary citizens of the Muslim world by the liberal West: There is nothing that moderate Muslims or anyone else should fear from the possible infiltration of radical Islam! Look at us, Western governments! We are bringing in refugees who cannot be vetted even if they are ISIS infiltrators. Although the Muslim Brotherhood is illegal and considered a terrorist organization in several Muslim countries, we in the West do not mind them at all. In fact, we in the West are so kind-hearted and welcoming that we are encouraging many organizations to operate legally in the West under the banner of the Muslim Brotherhood -- even organizations that are sympathetic to the terrorist group Hamas and that are pledging to overthrow us! See how we are courageous, self-confident and free of "Islamophobia"!

By embracing the Muslim Brotherhood as not dangerous to free societies and by bringing in refugees from terror-infested areas of the Middle East, we are sending a message to moderate Muslims in the Middle East: Citizens in the West are not even bothering to protect their free system from being conquered by sharia-lovers, so perhaps the dreams of the Caliphate are not that bad after all.

The West, by taking all the Syrian refugees, is not just sending the above "unintended" message; it is also emptying Syria of any kind of resistance to the Caliphate (ISIS). The West's compassion, by taking in the refugees escaping ISIS, will end up leaving only the radicals to rule unopposed in Syria and Iraq.

A US foreign policy that recommends absorbing unvetted Muslim refugees has been advocated as compassion, but in fact it is gross negligence and reckless endangerment to U.S. citizens, Western freedoms and democracy.

There are unintended consequences to rescuing all Muslim refugees:

By taking in Islam and its refugees without proper vetting, the West is not doing either Islam or Muslims any favor: for the reformists, it is shutting out any hope of reform.

Tough love is badly needed when dealing with the Muslim world. We must say: No, we cannot accept your jihadist aspirations. We cannot accept you forcing your way of life on the world; your way of life is unacceptable to us. Before you send your refugees, you must end your "us against them" jihadist culture. The civilized world no longer finds your aspirations for an Islamic Caliphate tolerable.

If the West has the courage to do that, perhaps one day history will attribute the reformation of Muslim world partly to strength and conviction of Western resolve against tyranny and human suffering.

Nonie Darwish, born and raised in Egypt, is the author of the new best-selling book, "Wholly Different; Why I chose Biblical Values over Islamic Values"