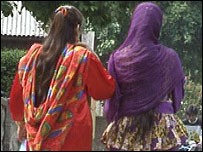 An 11-year-old girl has been rescued from a forced marriage, the Home Office has said.

Minister Baroness Scotland said the girl, who was born in Britain, was taken to Bangladesh at the age of six to care for her disabled mother.

At 11, she was forced into marriage but her aunt in the UK reported the case to authorities who brought her back to Britain and put her in foster care.

It is one of 5,000 cases handled by the government's forced marriage unit.

"Since she was six she'd been looking after her disabled mother and two siblings. And with the help of her aunt we were able to rescue her and bring her back."

It deals with 250 cases a year and has rescued 300 people, many of them very young girls.

News of the rescue coincides with the launch of a new handbook, offering survivors help and information.

A survivors' network has also been launched in partnership with Karma Nirvana, a forced marriage NGO, to provide long-term emotional support.

Plans to make forced marriage a criminal offence were rejected last year because of fears it would drive the practice underground.

Instead, a two-year government strategy intended to raise awareness and highlight the help available has been launched.

And the Forced Marriages Bill, which would enable the courts to order a range of measures to prevent forced marriages, is due to enter the grand committee stage on Thursday.

Baroness Scotland said: "Forced marriage is terrible for those women, children and men who find themselves in an often violent and abusive situation against their will.

"It's something that should not be happening in the modern world - it's not a respected cultural or religious tradition.

"Neither does it have anything to do with honour - there can be no honour in a marriage based on force and hostility."