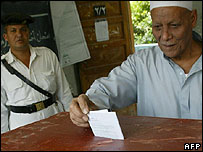 One man has been killed in election violence in Egypt, a few hours after the first round voting for the upper chamber of parliament got under way.

In Cairo, heavy police security meant that voters were unable to get to a polling station, reports said.

The poll comes after the recent arrests of about 700 members of the Muslim Brotherhood, the main opposition party.

The group is illegal but is fielding candidates as independents for 18 of the 88 seats up for grabs.

There are 264 seats in the upper house, 176 are elected in two tranches and 88 appointed by the president.

The opposition supporter was killed when gunfire broke out during clashes between ruling party supporters and independents outside a polling station in the northern Nile Delta region, police said.

The BBC's Heba Saleh in Cairo says there is traditionally a low turn-out in elections for the upper house, known as the Shura Council, because it has very limited legislative powers.

These are the first elections to be held in Egypt after changes to the constitution aimed in part at limiting the electoral chances of the Muslim Brotherhood, our correspondent says.

Brotherhood leaders say they are challenging the authorities despite the difficulties in order to widen the margin of freedom in the country.

The constitution has been changed to ban political activity based on religion and to weaken judicial supervision of elections.

Two major opposition parties, the al-Wafd and Nasserites, are boycotting the elections.

The National Democratic Party of President Hosni Mubarak has an effective monopoly power in Egypt, but this is being chipped away by the Muslim Brotherhood.

In 2005, the Brotherhood won nearly a fifth of the seats in the lower house of parliament.