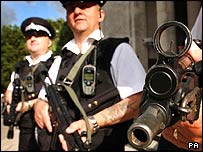 A seventh terror suspect has absconded while under a control order, the Home Office has confirmed.

The man, who has not been named on police advice, had been subject to the control order since November 2005.

The latest person to abscond had been fitted with an electronic tag and was subject to a 14-hour curfew and restrictions on who he could contact.

Mr McNulty said stricter controls had been in place but were revised after they were successfully challenged in court.

None of those who have absconded while under control orders - 17 of which are in force - have been tracked down.

Shadow Home Secretary David Davis said the use of control orders was an "ineffective approach".

"This is yet another example of how control orders, while doing much to undermine our rights and freedoms are astonishingly ineffective at protecting our safety," he said.

He said: "When it is so obvious that control orders are not working, the government must now hold a wholesale review of them as part of its upcoming terror legislation."

The Home Office has made it clear that control orders are not its preferred option for dealing with terror suspects.

Control orders give the home secretary powers to impose strict conditions on a subject's activities.

These can include a ban on using the internet or mobile phones, being told to observe a curfew or other restrictions on movements and travel, banning someone from airports or other locations, electronic tagging, and being told to report regularly to a police station.

The orders were introduced under 2005 anti-terrorism legislation to give ministers the power to put individuals suspected of involvement in terrorism under close supervision.

They came into force as an emergency measure in March 2005 after the Law Lords had declared that the previous policy of detaining foreign national terrorism suspects was incompatible with the UK's obligations under the European Convention on Human Rights.