London 'bomb' made safe by police 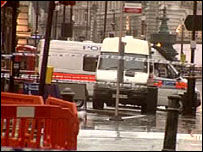 Police have made safe an explosive device in London.

Officers were called to reports of a suspicious vehicle parked in The Haymarket shortly before 0200 BST.

The immediate area was cordoned off while police examined what they described as a "potentially viable explosive device".

The Metropolitan Police Counter Terrorism Command has launched an investigation and The Haymarket is likely to remain closed for some time.