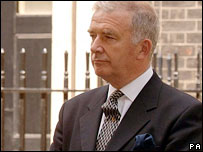 The battle to deal with radicalisation in the fight against terrorism could take at least 15 years to achieve, the UK's new security minister has said.

He urged people to be un-British by "snitching" to the authorities.

He said he wanted to get a cross-Britain consensus, to bring in the best brains, and look at things more holistically for what was a "daunting task".

Sir Alan said: "We're talking about such a big change in the way people behave that it's inevitably going to take 10 to 15 years, and that's if we're lucky, and that's what I hope we can achieve.

"I think it would be wrong to pretend otherwise to the British nation."

Sir Alan said jihadists outside the country were influencing young British men and women and that "we need to think about how we can change that".

He added: "I used the word 'snitch' because I thought this would get everyone rather excited and interested, and I think that's achieved that.

"If people are trying to destroy one's entire way of life and they don't care about how many people they kill, then I think it is really important to think hard about these things, to be vigilant, and of course if one has any doubts then let somebody know."

Sir Alan said he had never liked the expression "war on terror" and that he was very pleased the current government was looking at it in a different way.

BBC political correspondent Sean Curran said Sir Alan and other political leaders saw the situation as being more comparable with the Cold War, in that it was a "long haul" task in which a "battle of ideas" needed to be won.

Director of Liberty Shami Chakrabarti said Sir Alan's comments had represented an "important change in tone", and the minister was right to want to abandon the "divisive" war on terror rhetoric.

But she said in order to expect people to report their suspicions about family members or neighbours, the government would have to "inspire a sense of solidarity" in people.

Swiss Muslim academic and theologian Tariq Ramadan told BBC Radio Five Live it was important to distinguish between a "tiny minority" and the wider Muslim community who condemned extremism.

Mr Ramadan said he backed the call for more "snitching" in that all citizens should "come together and fight" terrorism, including giving support to the police.

But he added: "We must be very cautious not to nurture this sense of suspicion towards Muslims. I think that the current political discourse and also what is going on at the grass roots during the last three years, it's just worrying, about the change of atmosphere in our society."

Mr Brown told Sky News the current security "watchlist" system should be expanded to create a better flow of information about "the potential recruitment or the actual recruitment" activities of terrorist groups.

"Then we may have a better idea about people coming into different countries, whether as professional recruits or in other ways, and about what the dangers and the risks that we face are.

"I think it's very important that we tighten this up and it's something that we are looking at as a matter of urgency," he said.