THOUGH IT OFTEN SEEMS THAT OUR VICTORIES AGAINST THE RADICAL MUSLIMS ARE OFTEN FEW AND FAR BETWEEN - HERE IS A SMALL VICTORY WE ALL CAN CELEBRATE:

COPENHAGEN, July 13 (Reuters) - A Muslim group lost a libel case on Friday against the leader of a Danish anti-immigrant party who had accused its members of treason for publicising cartoons of the Prophet Mohammad.

A court ruled that Pia Kjaersgaard, leader of the Danish People's Party (DPP), did not libel the Islamic Faith Community when she accused some of its members of treason for travelling to the Middle East to publicise a Danish newspaper's publication of the drawings, which caused a worldwide uproar in 2006.

The court said the term "treason" was not libellous because it was used extensively in public debate. It ordered the plaintiffs, a loose network of Danish Muslim organisations which says it represents 50,000 members, to pay Kjaersgaard 40,000 Danish crowns ($7,400) in costs.

In September 2005, the newspaper Jyllands-Posten published 12 cartoons of the Prophet which were later reprinted elsewhere and provoked outrage among Muslims.

Three Danish embassies were attacked and at least 50 people were killed in rioting in the Middle East and Asia. Most Muslims regard any depiction of the Prophet as offensive.

"We are very disappointed with the verdict and are considering an appeal," said Kasem Ahmad, a spokesman for the Muslim group. He added that the group would issue a fatwa, or religious edict, against Jyllands-Posten if it did not receive an apology from the paper.

"It's too early to say any details of the fatwa," Ahmad said. "The fatwa is the last step and will also satisfy Muslims in the Middle East."

Kjaersgaard said she was relieved at the outcome but had expected to win.

"As a politician, I have both the duty and the right to express my opinion," she said. "I am convinced that many Danes felt as I did in the hectic winter days of 2006."

The DPP is not a member of the coalition government but supports it in parliament.

THESE BLOODTHIRSTY "DANISH" MUZZIES JUST ABOUT BROKE THEIR LEGS RUNNING OFF TO THE MIDDLE EAST TO STIR UP THE FLAMES OF VIOLENCE & DEATH WITH RIOTS THROUGHOUT THE MIDDLE EAST, ETC AGAINST A BUNCH OF CARTOONS. EVEN IN THE UK THEY TOOK TO THE STREETS: 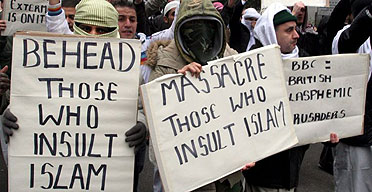 Muslims protest in London after the publication of cartoons depicting the prophet Muhammad in Danish and French newspapers. Photograph: Ian Langsdon/EPA

"A British Muslim man was today found guilty of two counts of soliciting to murder during a demonstration against the Muhammad cartoons.

Abdul Muhid, 24, a prominent member of the Saviour Sect which is linked to the radical cleric Omar Bakri Mohammed, led a crowd chanting "Bomb, bomb the UK" and produced placards with slogans such as "Annihilate those who insult Islam", the Old Bailey heard."

ALSO NOTICE HOW THE "DANISH" MUSLIMS TOTALLY DISCOUNT THE JUDGES RULING AND IMMEDIATELY RETALIATE BY ISSUING A FATWA."to satisfy Muslims in the Middle East" - ISLAMIC SHARIA LAW IMMEDIATELY TAKES PRECEDENT & DANISH LAW IS IGNORED BY THESE "FINE MEMBERS OF DANISH SOCIETY". AND WHY ARE THESE "DANISH" MUSLIMS WORRIED ABOUT THE MIDDLE EAST WHEN THEY ARE SUPPOSEDLY "DANES"? = JUST ANOTHER SIGN THAT MUSLIMS ARE ALWAYS MUSLIMS FIRST AND CAGILY PRETEND TO BE MEMBERS OF DANISH, BRITISH, etc SOCIETIES ONLY TO GET THEIR CLUTCHES ONTO OUR SOCIAL BENEFITS AND INFILTRATE OUR GOVERNMENT, POLICE, etc. FOR THEIR SELF SERVING NEFARIOUS PURPOSES.

IT IS HIGH TIME MORE JUDGEMENTS ARE ISSUED AGAINST MUSLIMS WHO SEEK TO DOMINATE OUR LIVES AND CONTROL OUR LANDS.

IT IS HIGH TIME THAT THE SHAM OF MUSLIM INTEGRATION BE EXPOSED FOR THE LIE IT IS - OTHERWISE WE WOULD BE SEEING THE SO CALLED "MODERATE" MUSLIMS TAKE TO OUR STREETS TO OPPOSE RADICAL ISLAM (see my 7/7 post on Glasgow Muslim Rallie A Flop). MUSLIMS WOULD IMMEDIATE TELL AUTHORITIES OF ANY MUSLIMS WHO WERE THREATS TO OUR SOCIETY AND BAN RADICALS FROM THEIR MIDST. BUT DON'T HOLD YOUR BREATH WAITING FOR THAT TO HAPPEN - IT WON'T!

THERE ARE NO TRUE MUSLIM CITIZENS OF THE UK/EU - THERE ARE ONLY MUSLIMS.

What did you think