UK to get 'unified' border force, lock up increased to 56 days without charge 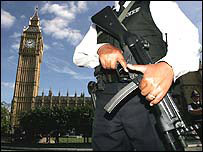 Britain is to get a "unified border force" to boost the fight against terrorism, the prime minister has said.

He also announced a review of allowing intercept evidence to be used in court, and doubling the 28 days police can question suspects before charging them.

The border force has been called for by the Conservatives for years, and had previously been rejected by ministers.

Officers from the Border and Immigration Agency, Revenue and Customs and UKVisas will be brought together to create a "single primary checkpoint" for passport control and customs.

Outlining his counter-terrorism strategy to MPs, he said the cabinet secretary had been asked to report back by October on how to implement the proposal "very soon".

Responding to the statement, Tory leader David Cameron said: "I'm delighted he has finally adopted our policy of a border police force."

Mr Brown also said he wanted stronger measures to stop terrorism suspects arriving in the first place, through electronic screening of all passengers checking in and out of the UK.

He said all visa applicants would require biometric visas from March 2008 and the existing "e-borders scheme" would be expanded.

An "all-party consensus" on the use of intercept evidence in court and questioning of suspects after they have been charged would be sought.

Mr Brown also said he would consult on whether to extend beyond 28 days the period suspects can be held before they are charged - possibly up to 56 days, subject to a judge's approval and parliamentary scrutiny.

An attempt to extend the period to 90 days in 2005, ended with Tony Blair's first Commons defeat as prime minister.

Ministers say it is right to consider extending it because of the increasing complexity of some plots - but the Tories, Lib Dems and some Labour backbenchers have opposed previous attempts to do so.

For the Lib Dems Nick Clegg, said a proposal for there to be Parliamentary oversight of any extension was "complete and utter nonsense".

"What is Parliament supposed to do when the police are detaining someone without charge? They won't be given privy to all the information so I'm afraid I think a lot of that is a bit of a fig leaf."

Amnesty International's Nicola Duckworth said locking people up for 56 days without charge "amounted to internment" which had "devastating consequences" in Northern Ireland in the 1970s.

And Liberty director Shami Chakrabarti said it would be better to be able to charge someone for a less serious offence, then go on to question them on more serious charges.

Other proposals announced include:

Mr Brown told MPs there had been 15 attempted terrorist attacks on Britain since 2001 and 30 people had been convicted so far this year.

He said 900 shopping centres, sports centres and other venues where large numbers of people congregate had been assessed by counter-terrorism advisers.

And he said "additional protection" was needed for utility sites, crowded places and the national infrastructure, from roads and the railway to waterways.

Reviews on security measures at such sites would be on-going over the summer, he added.