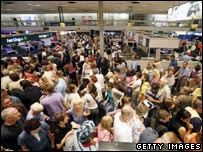 Security will be stepped up at railway stations, airports and ports as part of government attempts to tackle terrorism, Gordon Brown has announced.

There will be new security barriers, vehicle exclusion zones and blast resistant buildings, but air passengers will be allowed more luggage from 2008.

Rail travellers at large stations will also face having their bags screened.

The PM's statement came amid confusion over his security minister's views on detention limits for terror suspects.

In his wide-ranging Commons statement on national security, Mr Brown said that the failed bomb attacks in London and Glasgow Airport in June showed the need to ensure young people are not "radicalised" by extremists.

He outlined the creation of a new unit bringing together police and security intelligence to look not only at the "inner circle" of extremists but also at those at risk of falling under their influence.

The bulk of the statement covered security at public places such as transport hubs, which had been the subject of a review by ex-Admiral and current security minister Lord West.

Mr Brown said improved security would be installed at the country's 250 busiest railway stations, as well as airports, ports and more than 100 other sensitive locations.

"Additional screening" of baggage and passenger searches were planned at some large railway stations and other "sensitive locations", he said.

Guidance would be sent to thousands of cinemas, theatres, restaurants, hotels, sporting venues and commercial centres, as well as all hospitals, schools and places of worship to advise them on how to keep visitors safe against terrorism.

Ministers would work with architects and planners to encourage them to "design-in" better security measures in new buildings, such as blast resistant material, safe areas and traffic control measures.

Companies responsible for crowded places would be given updated advice on how they could improve resilience against attack, he said.

About 160 counter-terrorism advisers will train civilian staff to watch out for suspect activity, ensure premises have adequate emergency facilities and make best use of their CCTV footage.

Improved facilities to screen baggage would allow airports to seek approval from 7 January to let passengers take more than one item of hand luggage on flights.

However, size restrictions on liquids and cabin luggage would remain.

He said tougher measures to deal with convicted terrorists would be included in the upcoming Counter Terrorism Bill and a new unit will be set up in the Charity Commission, to make sure charities are not exploited by extremists.

Talks on "repatriation arrangements" for terrorism suspects, already agreed with Jordan, Lebanon and Algeria, were underway with "a number of additional countries," he said.

The prime minister also outlined measures to counter the influence of radical fundamentalists in Britain's schools, universities, mosques, youth clubs and prisons, as well as on the internet.

He said a new forum of head teachers would be convened to find ways to protect pupils from extremist propaganda.

"There is no greater priority than the safety and security of our people and building the strongest possible relationships across all faiths and communities," Mr Brown told MPs.

He also said a review of the use of intercept evidence in court cases - currently banned - would report back in January and he believed there was a "consensus" on allowing terrorist suspects to be questioned after they are charged.

Consultation with parties and communities was beginning on the controversial issue of holding terrorism suspects beyond 28 days without charge - which is opposed by both the Conservatives and the Liberal Democrats.

Mr Brown, whose security minister Lord West had earlier had to backtrack after saying he was not convinced about extending the 28 day limit, said he believed it was possible to get a cross-party consensus.

In his response, Tory leader David Cameron said there had been "a number of good ideas", and said the terrorist threat was now of "a completely different order" to that faced in the past.

But he said: "As a nation we need the hard-nosed defence of our liberties."

Introducing post-charge questioning and using intercept evidence should relieve the need to extend pre-charge detention beyond 28-days, he argued.

"This is not a separate issue from the issue about which you spoke at length, which is the issue of confidence in the minority communities, because this is an issue of great concern to them.

"There already is a substantial degree of consensus - that we should not proceed beyond the present 28 days."