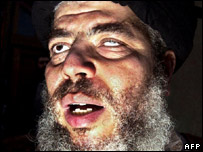 In the past, we have raised several cases of individuals or entities bypassing UN sanctions and assets freezing measures.

The latest example is provided by Abu Hamza Al-Masri (aka. Mustafa Kamel Mustafa). It has emerged this week that only two days before he was charged for inciting murder and racial hatred, Abu Hamza bought a house in Greenford, West London, for £220,000 in cash, while being held at the Belmarsh top-security prison. The house is featured on various websites.

At the same time, the British tax payers paid more than £250,000 in legal aid for this Islamist extremist.

The assets of Abu Hamza were frozen by the US, UN and the UK Treasury since April 2002. According to the UN Resolutions on sanctions against terrorism, governments are required to freeze the funds and other financial assets or economic resources “including funds derived from property owned or controlled, directly or indirectly, by them or by persons acting on their behalf or at their direction” and “ensure that neither these nor any other funds, financial assets or economic resources are made available, directly or indirectly, for such persons’ benefit”.

This case illustrates once again how ineffective is the assets freezing policy when it lacks the international regulations and tools to properly control and verify its implementation.