Wanted man may have fled in veil 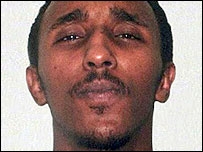 Mustaf Jamma is thought to have returned to Somalia Police seeking a man over the murder of Pc Sharon Beshenivsky are considering the theory he may have fled the UK dressed as a veiled Muslim woman.

Mustaf Jamma is thought to have returned to Somalia

It is understood West Yorkshire Police - who have not commented on reports about the veil theory - regard it only as one of a number of possibilities.  The wanted man, Mustaf Jamma, is the brother of Yusuf Jamma who was found guilty of the Pc's murder this week.

Mustaf Jamma is believed to be in his native Somalia.  The 26-year-old was released from jail six months before Pc Beshenivsky was killed.  Borders 'non-existent'  Shadow home secretary David Davies said the fact that anyone could be allowed through passport control wearing a veil was "barely credible".

"Doing so when an All Persons Bulletin for murder has been issued demonstrates that our borders are not just porous but non-existent," he added.  Some newspaper reports have suggested Mr Jamma stole his sister's passport and wore a full niqab (a veil that totally obscures the face) to evade checks at Heathrow airport between Christmas Day last year and New Year's Day.

A BAA Heathrow spokesman told The Times immigration control staff always did visual checks on people coming into the country but added only random checks were made on outgoing passengers.  On Tuesday the jury in the trial of four men over Pc Beshenivsky's death was discharged after failing to reach a verdict on a final count of robbery.

Three men have been found guilty of killing the officer, who was shot after an armed raid in Bradford in 2005. Another man had earlier admitted murder.  The jury could not decide if Raza Ul-Haq Aslam, 25 - who was cleared of murder, manslaughter and firearms offences - was guilty of robbery, and a re-trial was ordered.

As well as Mustaf Jamma another man called Piran Ditta Khan, whom the prosecution alleged was the "architect of the robbery", remains on the run from police.

Pc Beshenivsky, 38, was shot and killed on 18 November 2005 as she arrived at the Universal Express travel agents in Bradford city centre on the day of her youngest daughter's fourth birthday.  Her colleague Pc Teresa Milburn was also shot in the street as the robbers escaped with about £5,000.