Adding fuel to a cultural inferno 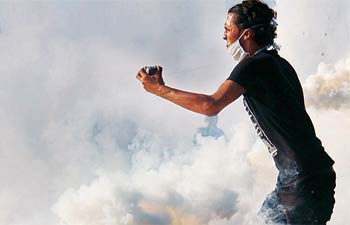 "Islam-baiting" in the West and "Islamic-rage" in the East both serve useful political purposes for their protagonists. The latest bait of, and provocation by, a blasphemous film (Innocence of Muslims) demonstrates this quite well.

Nikoula Basseley Nikoula, the producer of the film, is an Egyptian Copt in America. The 8 million Christian Copts in Egypt (10 per cent of the population) face discrimination and even violent persecution in "Muslim" Egypt, and thousands like Nikoula have fled to America. Not unsurprisingly, he is involved, according to the FBI, with right-wing, even fundamentalist, Christian organisations in the US, some of which are covertly Islamophobic while others are staunchly Republican.

Therefore two simultaneous and local cases are made out for the Islam-baiting - one for Coptic revenge for religious politics in Egypt and one for political manipulation in America on the eve of a new presidential election in the context of US intervention and retreat in Muslim countries like Iraq, Afghanistan, Pakistan, Egypt, Tunisia, Libya, Yemen, Sudan etc.

As one American commentator wrote, when President Obama recently refused to be drawn into describing Egypt's new Muslim Brotherhood government as an enemy or an ally, he "created a stir", compelling the State Department to "walk back a bit". It may be recalled that President Obama had, for purely domestic political reasons, balked at "apologising" to Pakistan for the Salala incident after having "apologised" to Afghanistan for the desecration of the Koran by US soldiers. It is bad politics in America in an election year to be seen as being "soft" on "Islamic" country-governments that nurture rabid anti-Americanism and spawn non-state Islamic extremists and terrorists who kill American soldiers and diplomats. Kuwaitis protest near the American embassy in Kuwait City.

In 2008, exactly seven weeks from the Presidential elections, an Islamophobic film created a stir when over 100 media outlets agreed to advertise the film and DVDs flooded the "swing states", allegedly funded by right-wing Christian NGOs. Obama's "Muslim" connection was duly exploited to try and harm his electoral prospects. It is interesting that neither President Obama nor Mitt Romney, has alluded in his comment to the anti-American blowback of bipartisan US foreign policies in Muslim lands. Indeed, most Americans have tended to take refuge in the first amendment to the American constitution (that guarantees free speech) and focused on the "unreasonable" response in the Muslim world.

The nature of the Muslim reaction, too, is worth noting for the impact of local politics on fuelling such religious outrage. The most violent rage has been expressed in Egypt, Tunisia, Libya, Yemen, Sudan, -all countries with a history of American or Western intervention in support of unpopular or autocratic regimes that have been recently ousted by a surge of popular Islamic passion led by overtly Islamic parties. An internal power struggle between moderate and hardline Islamists has made matters worse because each side has tried to outdo the other in expressing rage. In Libya, Yemen and Egypt, for example, Al-Qaeda and Salafist groups are openly contesting for anti-American space to leverage power. In Afghanistan, the Taliban/Al-Qaeda network has reason enough to celebrate 9/11 and avenge the "occupation" of their country while in Pakistan the provocation provides ammunition to the religious and sectarian groups to undermine the mainstream "pro-America" parties that still hanker for US economic and military aid.

The Shia-Sunni conflict is drowned in the wave of anti-Americanism because the US is both anti-Shia Iran and anti-Sunni Afghanistan. There is relatively moderate or nonviolent reaction in Muslim Central Asia, SE Asia, Indonesia, Sub-Saharan Africa and Turkey or in countries with relatively significant Muslim populations like India, Russia and China, because the US is not an aggressive "player" in these regions. In Saudi Arabia, UAE, Kuwait, Bahrain etc, the pro-American repressive Sunni regimes have put a lid on all forms of debate or protest. Therefore, among the 1.6 billion Muslims of the world, violent protests are the exception rather than the rule, and local politics has a major role to play in determining the nature and scope of the protest.

The recent incident has naturally spotlighted the issue of free speech in the West and violent Islamic reaction in the East. But few in the West are prepared to temper their free speech rights by accounting for deliberate incitements to hate until a crime has actually been committed on their own soil.

The reaction in the Muslim world also offers no positive solutions. Instead of educating people on the virtue of moderation and tolerance, textbooks and media continue to stress notions of Islamic identity, national pride, religious self-righteousness, country honour, societal revenge and state sovereignty. Blanket bans on mediums of communication like Facebook, YouTube, Google, etc, are ready instruments to appease religious fundamentalists but hardly sustainable for more mundane reasons. Under the circumstances, a clash of cultures, if not civilisations, is very likely to destabilise the world order.