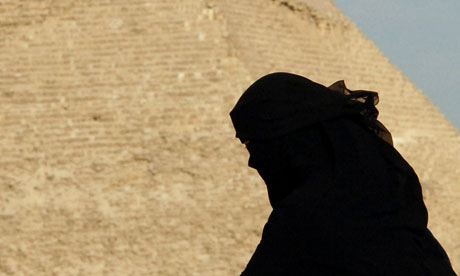 A woman wearing the niqab at the Giza pyramids. There is a fierce debate over how the role of religion will be defined in the new constitution. Photograph: Mohammed Sehety/AP

A teacher in southern Egypt punished two 12-year-old schoolgirls for not wearing the Muslim headscarf by cutting their hair, the father of one girl said on Wednesday.

The governor of Luxor province – where the incident occurred – called the teacher's actions shameful and said she had been transferred to another school. But rights groups say that some Islamic conservatives have been emboldened by the success of groups like Muslim Brotherhood and the ultraconservative Salafi trend in parliamentary and presidential elections and have been increasingly brazen about forcing their standards on other Egyptians.

The incident follows a surge in legal cases against Egyptians, mostly Christians, who allegedly showed contempt for religion.

It also comes amid a fierce debate over how the role of religion will be defined in the country's new constitution. The preponderance of Islamists on the panel drafting the document has alarmed liberals and religious minorities.

In the village of Qurna in Luxor province, 300 miles south of Cairo, father Berbesh Khairi el-Rawi said the teacher forced the two girls to stand with their hands above their heads for two hours and then cut their hair in their school.

He said he filed a complaint after the incident with the prosecutor's office in Luxor.

The prosecutor's office declined to comment on the case. Provincial governor Ezzat Saad confirmed the teacher had been transferred for a "shameful" act but did not otherwise comment.

The teacher told the Egyptian semi-official newspaper al-Ahram that the amount of hair she cut off of the girls' heads "did not exceed two centimetres".

Abu Bakar was quoted as saying she only resorted to cutting her students' hair after warning them repeatedly to cover their heads. After these repeated warnings, a student handed her scissors from his bag, and that he and other students asked her to "implement" her threats.Ziad Abdel Tawab of the Cairo Institute for Human Rights said the incident was alarming but not surprising.

"Whether in schools or outside schools, the general sentiment is that any abusive action, if it is justified as protection of Islam, is tolerable," he said.