Egypt needs a constitution that protects all its citizens 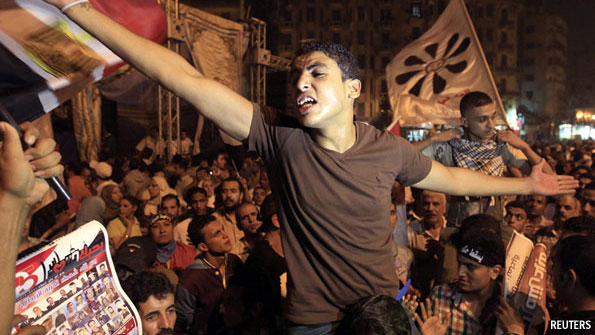 AFTER six decades of military dictatorship, Egypt sorely needs a constitution to set it on the path to democracy. So far the post-revolutionary establishment, dominated by the Islamists of the Muslim Brotherhood and Muhammad Morsi, their new president, has been making a hash of it.

Mr Morsi needs to reassure Egyptians of all religious and ideological stripes that they will be governed by a set of rules everyone can respect. Until then, Egypt will fail to cope with its many economic and social difficulties, let alone its political ones. Egypt has 85m people, making it by far the most populous country in the Arab world. It is squandering the chance to become a constitutional model for the entire region.

Since the Islamists emerged earlier this year as the new parliament’s main force, the constitutional process has been a mess (see article). The Islamists’ mistake was to pack a drafting assembly with like-minded people, who lacked legal skills and failed to reflect Egypt’s diversity. When the constitutional court, admittedly with judges from the old regime, dismissed the assembly, parliament picked another body much like the first. On October 23rd the assembly was referred to another court, which may ponder for months. Nobody knows what will happen if the new court decides to scrap the assembly. For the moment, today’s body will plod on with its work.

The draft’s content is even worse than the process. Its authors have been using the dictatorial constitution of 1971 from which to cut and paste. As a result, the president’s proposed powers are too great. Among other things, he would be able to choose anyone as prime minister, regardless of the majority in parliament. The drafters have been deaf to the fears of secular, liberal and non-Muslim Egyptians—a mistake, considering that nearly half of Egypt’s voters plumped for a secular-minded candidate in the presidential run-off in June. They have enshrined “the principles of sharia” as the “main source of law”, which non-Islamists can probably live with. But they then define those principles sweepingly, in essence, as the entire body of Sunni Muslim jurisprudence. One article grants the al-Azhar university, the country’s pre-eminent Islamic establishment, the sole right, albeit hazily defined, to interpret sharia. Sections granting a range of freedoms are undermined by others that could limit women’s rights as well as freedom of speech and worship.

It is not too late for Mr Morsi to appoint a new, more diverse assembly with greater legal expertise to draft his constitution. Rather than get bogged down in questions of religious values and national identity, it should focus on setting out the basic rules of governance: electoral procedure, devolution from the centre, and checks and balances between the legislature, the executive and the judiciary. The courts must be independent and the armed forces entirely under the elected civilian authority’s control. Rights for minorities must be spelt out.

The question of Islam’s role is plainly the hardest. Mosques and churches can have a say in adjudicating family matters, but Egyptians who wish to conduct their personal lives outside those institutions should be free to do so. Drafters of constitutions elsewhere in the Arab world have performed semantic acrobatics to provide for Islam as a (sometimes “the”) source of inspiration, while not insisting that sharia, which is anyway open to interpretation, be enforced to the letter. Having won parliamentary power after long years of oppression, the Islamists, in Egypt and elsewhere, will surely want to infuse their constitutions with a tinge of religiosity. But they should not impose their beliefs on their fellow citizens