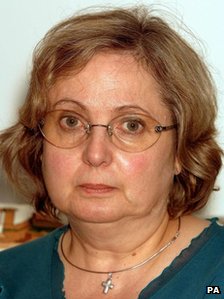 Nadia Eweida was banned from displaying her cross at work

A British Airways employee suffered discrimination at work over her Christian beliefs, the European Court of Human Rights has ruled.

Judges ruled Nadia Eweida's rights had been violated under Article 9 of the European Convention on Human Rights.

She took her case to the European Court of Human Rights after BA made her stop wearing a cross visibly.

Judges ruled that the rights of three other Christians had not been violated by their employers.

The other cases involved nurse Shirley Chaplin, 57, whose employer also stopped her wearing necklaces with a cross, Gary McFarlane, 51 - a marriage counsellor fired after saying he might object to giving sex therapy advice to gay couples - and registrar Lillian Ladele, who was disciplined after she refused to conduct same-sex civil partnership ceremonies.

All four lost separate employment tribunals relating to their beliefs and made individual applications to the court, but their cases are being heard together.

Ms Eweida, 60, was banned from displaying her white gold cross at work.

The four Christians claimed their employers' actions went against articles nine and 14 of the European Convention on Human Rights, which protected their rights to "freedom of thought, conscience and religion" and prohibited religious discrimination.

Shirley Chaplin: "Wearing a cross is part of my Christian identity"

Ms Eweida, a Coptic Christian from Twickenham in south-west London, was asked to leave her job in 2006 after refusing to remove her cross.

An employment tribunal found she had not been subjected to religious discrimination but BA later altered its uniform code to allow symbols of faith, including crosses.

Ms Ladele was disciplined by Islington Council, in north London, after saying she did not want to conduct same-sex civil partnership ceremonies. Her lawyers said the service could have been performed by other employees who were prepared to carry them out.

Mr McFarlane, a Bristol relationship counsellor, worked for the Avon branch of national charity Relate but was sacked for gross misconduct in 2008 after saying on a training course he might have an objection to discussing sexual problems with gay couples.

Ms Chaplin, from Exeter, was transferred to a desk job by Royal Devon and Exeter NHS Trust Hospital for failing to remove a confirmation crucifix on a small chain, which she had worn to work for 30 years.