The persecution of Christians in Morsi’s Egypt is now serious.

The persecution of Christians in Morsi’s Egypt is now serious. So, will Obama use his billion dollar subsidy in their defence? Don’t hold your breath

Obama’s personal history may explain why 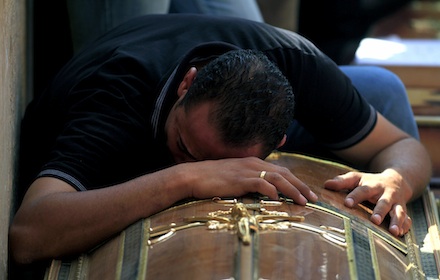 I open by drawing your attention to the shocking story (one among an increasing number of examples of the growing oppression of Coptic Christians under Egypt’s brand-new Islamist dictatorship) of Nadia Mohamed Ali, who was brought up as a Christian, and converted to Islam when she married a Muslim, 23 years ago. He later died, and his widow decided to return to her Christian faith, together with her children. She registered as such under the Mubarak regime, and applied for and received new identity cards containing this information, between 2004 and 2006. When her re-conversion to her old faith emerged under the Morsi regime, Nadia was sentenced to fifteen years in prison: so too were her seven children; even the clerks who processed the identity cards were imprisoned.

In the article where you may read about this (link above), Benjamin Weinthal draws attention to an interesting question, posed by one Jordan Sekulow, who runs something called the American Center for Law and Justice. “Now that Sharia law has become an integral part of Egypt’s new constitution, Christians in that country are at greater risk than ever,” comments Sekulow of the imprisonment of Nadia Mohamed Ali and her children. “This is another tragic case that underscores the growing problem of religious intolerance in the Muslim world. To impose a prison sentence for a family because of their Christian faith sadly reveals the true agenda of this new government: Egypt has no respect for international law or religious liberty.”

All, I fear, increasingly evident, as Morsi’s real agenda unfolds before the Western world’s horrified gaze, causing many to wonder if Egypt really wasn’t a lot better off under the tender mercies of Hosni Mubarak. Morsi has refused to take any action against the rising violence against the Copts (10 per cent, don’t forget, of Egypt’s population). In August, the Christian community in a place called Dahshour (some 100 families) was forced to flee after their Muslim neighbours violently attacked their homes and property. Morsi simply said, when asked, that their expulsion and the violence against them had been “blown out of proportion”. He has done nothing to contain the violence encouraged by radical Salafi preachers – who have of course formed an alliance with Morsi and the Muslim Brotherhood – who called for Muslims to “shun” Christians during Christmas: not, we may be sure, a simple matter of ignoring them.

So, what, it might be wondered, will President Obama say about all this? Morsi is due to meet the President, possibly in March. Sekulow thinks that the US State Department should play “more of a role in discouraging this kind of persecution. The US should not be an idle bystander. The US provides more than $1 billion to Egypt each year. The State Department should speak out forcefully against this kind of religious persecution in Egypt.”

But will it? Will President Obama use that billion dollars (which he will add, don’t forget, to America’s multi-trillion dollar deficit) to bring pressure on Morsi to protect his Christian minority? For the answer to that, I refer you to a very interesting piece by Michael Yussuf, born an Egyptian Copt and now an American citizen, who opens with a simple question: “Why doesn’t President Obama – who claims to be a Christian – ever defend the cause of the harassed and persecuted Christians around the world?”

According to Yussuf, it’s because he prefers Islamist dictatorships to secular ones. He was quick to call on Mubarak to resign. Morsi’s dictatorship is just as corrupt: but, says Yussuf, “that is cultural; the increase — not decrease — in corruption under the Islamic dictator who replaced Mubarak has proven that.” He points out that Rashid Khalidii, a Hamas supporter and former PLO advisor, is an old Chicago friend of Obama’s, and that the president also studied under and maintained a relationship with Edward Said, who served as a member of the Palestine National Council and worked with Yasser Arafat.

Morsi and Obama, says Yussuf (who really doesn’t like Obama), “both love to hear themselves talk. Not just any talk, but speeches that support ideas that are the opposite of what they actually do. When they give a speech, knowledgeable people in both countries look at each other and ask, “What did he just say?” For both of them, speeches are all about the art of composition – words, mere words. They speak out of both sides of their mouths.”

All of that is interesting, and some of it may even be valid. But one thing is absolutely certain. “The Christians being killed in Egypt, Syria, Pakistan, and Nigeria”, as Yussuf says, “don’t have an advocate in the White House, but they do have one in Heaven. That is the only place they need to look for help.” More to the point, it’s the only place they can look. Certainly Obama will not help them. And he’ll carry on subsidising the Islamist dictator Morsi to the tune of a billion a year. What are we to make of that?