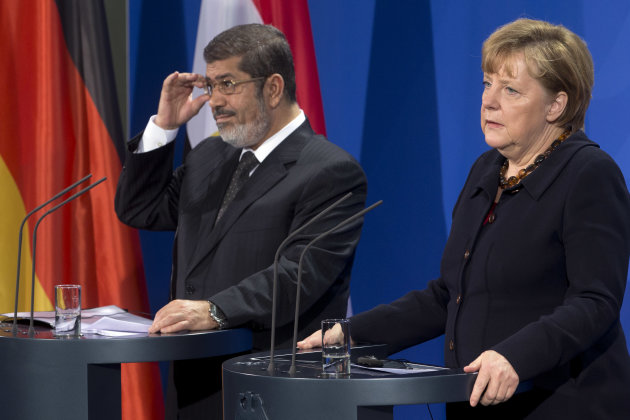 BERLIN (AP) — Egypt's Islamist president turned aside repeated criticism of his past comments referring to Jews as "the descendants of apes and pigs" as he visited Germany on Wednesday, insisting that the remarks were taken out of context and were aimed at criticizing Israeli attacks on Palestinians.

A key focus of Mohammed Morsi's one-day visit to Berlin was to seek support to rebuild a crumbling Egyptian economy. However, questions about his comments — made in 2010 — pursued him throughout the day. The remarks drew attention earlier this month when an Egyptian TV show aired them to highlight and mock Morsi's current policies.

A tightlipped German Chancellor Angela Merkel, who earlier in the day had opened an exhibition marking the 80th anniversary of Adolf Hitler's rise to power and attended an annual parliamentary memorial event to Holocaust victims, said she had brought up the issue during her meeting with Morsi.

"The president told me what he meant by that, so I'll pass it over to him," she said during a short media briefing.

Morsi said he was "not against the Jewish faith or the Jewish people."

He added: "My comments were about conduct that sheds blood and kills innocent people — things neither I ... nor anyone condones."

The controversy over Morsi's comments reflects the collision between his long career as a leader in the vehemently anti-Israeli Muslim Brotherhood and his status now as a head of state in a country that relies heavily on Western support and has a peace treaty with Israel.

Anti-Semitic statements are easily found in Brotherhood writings. Usually, officials try to present their comments as directed against Israel, but at times they slide into outright slurs against Jews in general.

In the video, Morsi refers to "Zionists" as "bloodsuckers who attack Palestinians" as well as "the descendants of apes and pigs."

He also says Egyptians should nurse their children on "hatred for them: for Zionists, for Jews. They must be breast-fed hatred."

Morsi appeared testy when prodded again about the comments during an appearance later Wednesday at an event organized by a private think tank.

"I would like to thank you for the question that I have heard several times today, and I've answered it five times today, too," he said. "I also answered that question in Cairo throughout the past two weeks at least 10 times."

"My comments were taken out of context," he said. "They were about the repeated Israeli attacks against Palestinians and the shedding of Palestinian blood."

"Children in Egypt have grown watching images of bloodshed and how aggression and killings taking place," he added. "My comments were about the conduct and manners, the killings and the aggression by tanks and warplanes and cluster bombs and internationally banned weapons against innocent people."

Morsi insisted that he "cannot be against the Jewish faith or Jews or Christianity and Christians," because the Quran, the Muslim holy book, commands him "to believe in all religions."