Egypt curfew scaled back as Mursi seeks end to bloodshed

By Edmund Blair and Alexandra Hudson 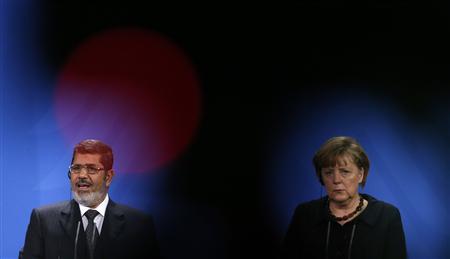 CAIRO/BERLIN (Reuters) - Authorities in an Egyptian city scaled back a curfew imposed by President Mohamed Mursi, and the Islamist leader cut short a visit to Europe on Wednesday to deal with the deadliest violence in the seven months since he took power.

Two more protesters were shot dead before dawn near Cairo's central Tahrir Square on Wednesday, a day after the army chief warned that the state was on the brink of collapse if Mursi's opponents and supporters did not end street battles.

More than 50 people have been killed in the past seven days of protests by Mursi's opponents, raising global concern over whether the Islamist leader can restore stability to the most populous Arab country.

Mursi imposed a curfew and a state of emergency on three Suez Canal cities on Sunday but that only seemed to further provoke crowds in a week of unrest marking the second anniversary of the uprising that toppled Hosni Mubarak.

The governor of Ismailia, one of the three canal cities, said on Wednesday he was scaling back the curfew, which would now take effect nightly from 2:00 a.m. instead of 9:00 p.m..

Mursi, speaking in Berlin before hurrying home to deal with the crisis, called for dialogue with opponents but would not commit to their demand that he first agree to include them in a unity government.

Asked about that proposal, he said the next government would be formed after parliamentary elections in April.

Egypt was on its way to becoming "a civilian state that is not a military state or a theocratic state", Mursi said.

The violence at home forced Mursi to scale back his European visit, billed as a chance to promote Egypt as a destination for foreign investment. He flew to Berlin but called off a trip to Paris and was due back home after only a few hours in Europe.

Chancellor Angela Merkel, who met him, echoed other Western leaders who have called on him to give his opponents a voice.

"One thing that is important for us is that the line for dialogue is always open to all political forces in Egypt, that the different political forces can make their contribution, that human rights are adhered to in Egypt and that of course religious freedom can be experienced," she said at a joint news conference with Mursi.

Mursi's critics accuse him of betraying the spirit of the revolution by keeping too much power in his own hands and those of his Muslim Brotherhood, the Islamist movement banned under Mubarak which won repeated elections since the 2011 uprising.

Near Cairo's Tahrir Square on Wednesday morning, dozens of protesters threw stones at police who fired back teargas, although the scuffles were brief.

"Our demand is simply that Mursi goes, and leaves the country alone. He is just like Mubarak and his crowd who are now in prison," said Ahmed Mustafa, 28, a youth who had goggles on his head to protect his eyes from teargas.

Opposition politician Mohamed ElBaradei called for a meeting of the president, ministers, the ruling party and the opposition to halt the violence. But he also restated the precondition that Mursi first commit to seeking a national unity government.

The worst violence has been in the Suez Canal city of Port Said, where rage was fuelled by death sentences passed against soccer fans for roles in deadly riots last year.

After decades in which the West backed Mubarak's military rule of Egypt, the emergence of an elected Islamist leader in Cairo is probably the single most important change brought about by the wave of Arab revolts over the past two years.

Mursi won backing from the West last year for his role in helping to establish a ceasefire between Israel and Palestinians that ended a conflict in Gaza. But he then followed that with an effort to fast-track a constitution that reignited dissent at home and raised global concern over Egypt's future.

Western countries were alarmed this month by video that emerged showing Mursi making vitriolic remarks against Jews and Zionists in 2010 when he was a senior Brotherhood official.

German Foreign Minister Guido Westerwelle said ahead of Mursi's visit that the remarks, in which Mursi referred to Zionists as "descendants of apes and pigs" were "unacceptable".

Asked about those remarks at the news conference with Merkel, Mursi repeated earlier explanations that they had been taken out of context.

"I am not against the Jewish faith," he said. "I was talking about the practices and behaviour of believers of any religion who shed blood or who attack innocent people or civilians. That's behaviour that I condemn."

"I am a Muslim. I'm a believer and my religion obliges me to believe in all prophets, to respect all religions and to respect the right of people to their own faith," he added.

Egypt's main liberal and secularist bloc, the National Salvation Front, has so far refused talks with Mursi unless he promises a unity government including opposition figures.

"Stopping the violence is the priority, and starting a serious dialogue requires committing to guarantees demanded by the National Salvation Front, at the forefront of which are a national salvation government and a committee to amend the constitution," ElBaradei said on Twitter.

Those calls have also been backed by the hardline Islamist Nour party - rivals of Mursi's Brotherhood. Nour and the Front were due to meet on Wednesday, signalling an unlikely alliance of Mursi's critics from opposite ends of the political spectrum.

Brotherhood leader Mohamed El-Beltagy dismissed the unity government proposal as a ploy for the Front to take power despite having lost elections. On his Facebook page he ridiculed "the leaders of the Salvation Front, who seem to know more about the people's interests than the people themselves".

In a sign of the toll the unrest is having on Egypt's economy, ratings agency Fitch downgraded its sovereign rating by one notch to B on Wednesday.

German industry leaders see potential in Egypt but are concerned about political instability.

"At the moment many firms are waiting on political developments and are cautious on any big investments," said Hans Heinrich Driftmann, head of Germany's Chamber of Industry and Commerce.

(Additional reporting by Yasmine Saleh and Marwa Awad in Cairo, Stephen Brown and Gernot Heller in Berlin and Arshad Mohammed in Washington; Writing by Peter Graff; Editing by Peter Millership)