CAIRO: Opposition leader Mohamed El Baradei on Saturday called for a boycott of Egypt’s upcoming legislative elections as the president was set to reschedule the first round which clashes with a Christian holiday. 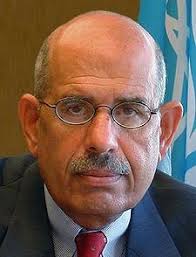 “Called for parliamentary election boycott in 2010 to expose sham democracy. Today I repeat my call, will not be part of an act of deception,” the Nobel Peace laureate and former head of the UN atomic watchdog wrote on Twitter.

Former foreign minister Amr Mussa, another leader in the National Salvation Front (NSF), said many members of the opposition bloc were inclined to boycott the four-round election, but a final position had not yet been taken.

“There is a large group that wants a boycott, but it has not yet been discussed, and no decision has been taken,” he told AFP.

The election is scheduled to begin on April 27, with a new parliament to convene on July 6.

But the presidency said it was “seriously” considering changing the starting date because it falls on the Christian holidays of Lazarus Saturday and Palm Sunday, after objections from the Coptic Church.

Father Rafiq Greish, the Catholic Church’s spokesman in Egypt, told AFP that he spoke with the presidency, which “accepted” rescheduling the first round.

Greish said he discussed with an adviser to the president the possibility of changing the first round of the election to April 23.

And the official MENA news agency reported that “a presidential adviser said the new dates will be announced ‘within hours’.”

El Baradei, who did not elaborate about his boycott call on Twitter, raised the suspicion that the vote might be rigged, as was the case in a 2010 election under ousted long-time president Hosni Mubarak.

Leaders of the NSF, an alliance that brings together liberal and secular leaning groups, have previously proposed a postponement of the vote.

The coalition organised massive protests against Morsi in November and December after he adopted now-repealed powers that shielded his decisions from judicial review.

But anti-Morsi protests have slowed since he pushed through an Islamist-drafted constitution in a December referendum, with the mass rallies giving way to smaller, and often violent, protests.

The opposition, less organised than Morsi’s Muslim Brotherhood, has insisted the president appoint a new government before the election while the presidency says the new parliament should have the right to appoint the cabinet.

The Brotherhood and other religious party allies dominated the last parliamentary election in 2011 that resulted in an Islamist-majority house which a court annulled on a technicality before Morsi’s election last June.

But due to increased anti-Morsi sentiment, Hamdeen Sabahi, another NSF leader, has said the opposition coalition could now win up to 50 percent of seats in parliament if it chose to contest the election.