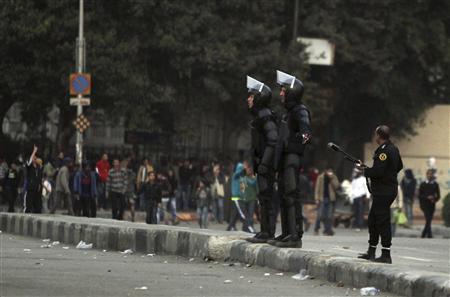 CAIRO (Reuters) - Egypt's election committee has scrapped a timetable under which voting for the lower house of parliament should have begun next month, state media reported on Thursday, following a court ruling that threw the entire polling process into confusion.

Egypt now lies in limbo, with no election dates at a time when uncertainty is taking a heavy toll on the economy - the Egyptian pound is falling, foreign currency reserves are sliding and the budget deficit is soaring to an unmanageable level.

The political crisis deepened on Wednesday when the Administrative Court canceled a decree issued by President Mohamed Mursi calling the election.

It also returned the electoral law, the subject of feuding between the opposition and Mursi's ruling Islamists, to the Constitutional Court for review.

State news agency MENA said the elections committee had issued its decision to scrap the voting schedule after "the committee saw the details and reasons for the ruling by the Administrative Court announced on Wednesday".

Egypt's turbulent transition to democracy after the overthrow of Hosni Mubarak two years ago has been marked by a number of disputes between the ruling Muslim Brotherhood and the judiciary.

Last year Mursi temporarily gave himself sweeping powers and barred the courts from challenging his decisions, a move which provoked waves of violent protests. However, Mursi promised to respect Wednesday's ruling.

The four rounds of voting had been due to start on April 22 and last until late June. The old lower house was itself dissolved after a court ruled against a previous version of the electoral law used to elect it.

Chaos in the electoral process means that Egypt is unlikely to secure a $4.8 billion loan from the International Monetary Fund to shore up the government's finances, at least until some kind of order is restored.

Analysts say the IMF is likely to demand support from across the political spectrum for painful economic reforms, but that consensus is non-existent.

The liberal and leftist opposition has said the election should not be held at a time of national crisis and most parties had already announced a boycott.

As well as the economic malaise, Mursi's government is also struggling with serious security problems and one protester was shot dead on Thursday in a fifth day of clashes between police and demonstrators in Port Said.

Violence has afflicted the Suez Canal city since January over death sentences handed down to local people for their role in a soccer riot last year when more than 70 people died. A court hearing on Saturday is expected to confirm the death sentences given to 21 prisoners.