One person was reported to have died in the clashes

One person has been killed in clashes outside Cairo's main cathedral following the funerals of four Coptic Christians killed in religious violence on Thursday.

Police fired tear gas to break up the violence. More than 80 people were injured, the state news agency said.

The health ministry said one Christian man was killed. The ambulance service said he was struck with birdshot.

Witnesses told local TV stations that the violence started when a mob attacked mourners as they exited the cathedral, pelting them with stones and petrol bombs. There was initially little police presence.

The Christians responded by throwing stones back, the witnesses said, until police arrived and attempted to quell the unrest, firing tear gas into the cathedral compound. 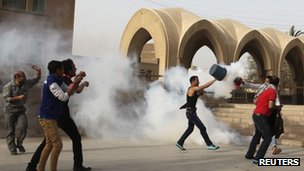 Egypt's state news agency said the streets around the cathedral had seen "on-and-off" clashes between Christians and "unidentified persons".

It said a fire had started in a building adjacent to the cathedral, but the blaze had since been extinguished.

Pope Tawadros, who only took office in November, appealed for calm.

The political arm of the Muslim Brotherhood, the Freedom and Justice Party (FJP), posted a statement on its Facebook page stressing its "utter rejection and condemnation of violence".

It urged both sides "not to respond to systematic provocations" or "ploys that target the homeland", but did not say who might be responsible for inciting the violence.

Hundreds of mourners packed into Egypt's biggest cathedral. There were tears and angry chants as the crowd carried in the coffins.

It all started with graffiti on the wall of an Islamic centre in Khosous, a suburb of Cairo - a red swastika with boys' names underneath it.

But some Muslims in the area interpreted the symbol as a cross, and Christians were blamed.

It would seem none of them had anything to do with the graffiti, which police think was just daubed on the wall by children.

The priest of the local church, Father Sourial Yunnan, told us that after living peacefully with their Muslim neighbours for so long, conditions for Christians in Egypt had deteriorated under the ruling Muslim Brotherhood. He, like many, believes worse is yet to come.

Back at the cathedral, the funerals turned into a demonstration against Egypt's ruling party. It spilled out into the streets and there were clashes with police and locals. It was an outpouring of rage, but also fear about the future.

Egypt's minority of Coptic Christians, who make up about 10% of the population, have accused the government of failing to protect them, following the fall of Hosni Mubarak in 2011.

Clashes between Muslims and Coptic Christians have been seen numerous times since then, but this weekend's violence was the worst seen in several months.

Police said five deaths - four Copts and one Muslim - occurred on Saturday in Khosous, about 10 miles (15km) north of Cairo, after inflammatory symbols were drawn on an Islamic institute, provoking an argument.

The dispute escalated into a gun battle between Christian and Muslim residents, while Christian-owned shops were also attacked.

Violence there flared again on Sunday, with police reporting more sectarian fighting on the streets and clashes between police and youths.

Talaat Abdullah, who was named to the post by President Morsi in December, has provoked anger by demanding the arrest of several high-profile political activists.

In a statement on Sunday, Egypt's Supreme Judiciary Council urged Mr Abdullah to return to his previous job as a judge.

Last week a court annulled the presidential decree that appointed him, but Mr Abdullah continued to carry out his duties, including issuing arrest warrants for activists accused of insulting President Morsi and Islam.

Discontent with the government has also spread to the economy. Unemployment is continuing to rise and industrial action has become commonplace.

On Sunday Egypt's railways were brought to a standstill after train drivers went on strike, demanding salary rises and the payment of other benefits