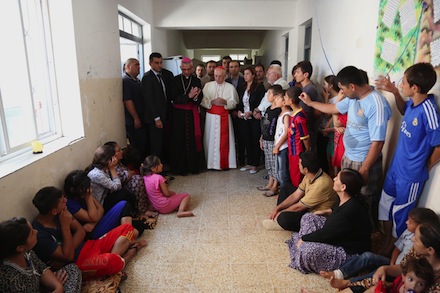 Pope Francis’s personal envoy to the suffering people of Iraq joined the Chaldean Catholic patriarch in launching an appeal to the international community today, pleading for help to liberate villages controlled by the Islamic State terrorists and to provide the displaced with international protection.

Cardinal Fernando Filoni, who has been in Iraq since August 13 at the Pope’s request, and Chaldean Catholic Patriarch Louis Sako of Baghdad said international action was necessary to provide the displaced with basic necessities like food and water, but also to guarantee the possibility of their survival in Iraq.

In their appeal, the cardinal and patriarch asked nations to “take their moral responsibility seriously” by helping to liberate villages in north-eastern Iraq captured by the Islamic State militants.

The Christians, Yezidis and other minorities forced out of their villages because they would not convert to the militants’ idea of Islam just want to return to their homes and live in peace, the cardinal and patriarch said. “The hope of these people must not be allowed to die!”

During his Mass for peace and reconciliation in Seoul, Pope Francis offered prayers for Cardinal Filoni and for Iraq. The cardinal, the Pope told the congregation, “was supposed to be with us here”, but instead had been sent “to the suffering people of Iraq, to help the persecuted and displaced, and all religious minorities who are suffering in that land. May the Lord be with him in his mission.”

Cardinal Filoni has been talking about his trip with Vatican Radio each day. He spent last Friday with displaced Christians in a camp in Duhok and meeting Yezidi community leaders.

The Yezidi community is “suffering terribly because of the deaths they have had, the kidnapping of their women and their houses being stolen. They don’t know where to go,” the cardinal said.

Chaldean Archbishop Amel Shamon Nona of Mosul, Iraq, told Vatican Radio the Islamic State militants “think that anyone who is different from them does not deserve to live”, which is why, under the threat of violence, they tell Christians and Yezidis to convert or flee.

“They [militants] represent a great threat to humanity,” the archbishop said. “These groups don’t just want to conquer a piece of territory and stay there. Their objective is the whole world.”

Cardinal Filoni spent Saturday in Manghes with displaced Christians and Yezidis from Qaraqosh and other villages in the Ninevah Plain. The question the people raised over and over, he said, was “What have we done to deserve death?”