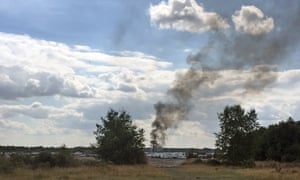 Questions have been raised over the cause of Friday’s plane crash in which three members of the Bin Laden family were killed, given the aircraft had used the runway, which is fitted with hi-tech safety features, regularly in recent months.

The Saudi-registered Embraer Phenom 300 jet, which had departed from Milan’s Malpensa airport, was attempting to land at Blackbushe airport on the Hampshire/Surrey border when it crashed on to dozens of vehicles parked at a car auction site close to the runway.

The £7m state-of-the-art plane, equipped with fly-by-wire electronic system that is supposed to make it easy to control, was a regular visitor to the airport, according to pilots who use Blackbushe. It was attempting a landing in near perfect conditions on a runway that was fitted with precision approach pathway indicators (Papis).

The four indicators, which can be seen from more than half a mile away, all flash white if the pilot is coming in too high and red if too low. “It doesn’t make sense to me as an ordinary pilot why something that advanced and easy to fly would bury itself in the auction ground at the end of such a long runway,” said Simon Moores, a flight instructor and pilot who has flown from Blackbushe many times.

The Saudi-registered plane was coming in from Milan when the accident happened shortly after 3pm. According to NBC, it was carrying three relatives of Osama bin Laden. They were named as Rajaa Hashim, Osama’s stepmother; Sana bin Laden, his half-sister; and her husband Zuhair Hashim. The pilot has yet to be identifed.

Without confirming the identities of the victims, the Saudi ambassador to Britain, Prince Mohammed bin Nawaf al Saud, offered condolences on the embassy’s official Twitter account to the Bin Laden family, a prominent Saudi Arabia clan with vast business interests.

“His royal highness Prince Mohammed bin Nawaf bin Abdul Aziz, the ambassador of the custodian of the two holy mosques to the United Kingdom, offered his condolences to the sons of the late Mohammed bin Laden and their relations for the grave incident of the crash of the plane carrying members of the family at Blackbushe airport,” the Saudi ambassador said in the tweet.

A further statement said the embassy would work with the British authorities to ensure a quick repatriation of the bodies for burial. The Saudi General Authority of Civil Aviation has sent investigators to the scene of the crash and are liaising with the Air Accidents Investigation Branch (AAIB), which is looking into the causes of the crash. 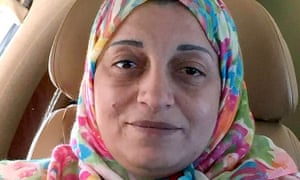 Sana bin Laden, who is thought to have died in the crash. Photograph: Public domain

Hampshire police have urged anyone with “any information, including pictures and videos of the incident” to contact them.

Acting chief inspector Olga Venner, of Hampshire police, said: “We can confirm that there were four people on board, including the pilot. Sadly there were no survivors. No one on the ground has been injured and we would urge anyone with any information, including pictures or videos, to contact 101.”

An airport spokesman said: “Blackbushe airport confirmed that a Phenom 300 jet with four persons on board crashed near the end of the runway around 3.09pm while attempting to make a landing. The scene was attended by Blackbushe fire and rescue within minutes, followed by Hampshire fire, police and ambulance units.”

A statement from Hampshire fire and rescue said that approximately 24 firefighters from Yateley, Fleet, Hartley Wintney, Rushmoor, Alton and Camberley were involved in tackling the blaze. “The incident involved one aircraft which had come off the runway,” the service said in a statement. “The firefighters used 10 breathing apparatus, three foam jets and two hose reel jets to extinguish the fire.”

After the crash, a dark plume of black smoke could be seen twisting into the sky while an orange-red ball of fire raged below. Debris from the jet could be seen strewn among the dozens of severely damaged cars at the British Car Auction (BCA) site. 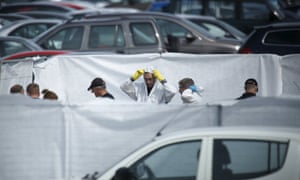 Robert Belcher, a local aviation enthusiast, said he was driving home when he saw a plume of black smoke coming from the site. “I was passing the airport on my way home and there was a big column of smoke in the air,” he said. “The fire service had closed the road behind me. I could see the plume of smoke waving from about five miles away and was hoping it was just a car fire rather than an aircraft accident.”

“Apparently the aircraft was landing and just didn’t stop,” he added. “At the end of the runway there is a car park because the airport is used for car auctions and it’s gone into there. I assumed it was cars on fire in the auction yard. Local people have said that it was this aircraft which is registered in Saudi Arabia. It’s been a regular visitor to the airport for a few months. The aircraft would hold six people, it’s a small jet.”

A group of people, believed to be the family of the victims, were seen yesterday being escorted to the site by police officers. The scorched remains of the jet could be seen lying beside charred hulks of cars in the middle of the auction storage area.

A resident who did not want to be named said he saw the plane come down while he was repairing his chimney. “I was on the roof and I heard the jet and thought I would watch it land,” he said. “I saw it going past, then it was about 20 feet off the ground and I thought, it’s not got enough runway to land here. It was too high as it was coming in to land and didn’t touch the runway. The next thing I heard was the crash sirens and a big plume of smoke going up. It was a really big plume of smoke and I could hear cars exploding over at the market.”

Eyewitness Sheraz Aslam, 31, from Reading and a regular BCA customer, told the GetSurrey website that he had gone back to pick up a couple of cars when the crash happened.

“An announcement came through [that] we had to evacuate [the site],” he said. “I didn’t think much of it, I thought it was just a regular fire alarm or drill. You don’t think a plane is going to come down. Then a load of staff ran in and it was then we realised something was going on. I was very, very close, maybe 30 or 40 yards away.

“I didn’t hear anything. All of a sudden, the flames went really big. We could hear all the fuel tanks in the cars start to explode and there was a terrible smell. Then I noticed a bit of the wing sticking out. It was sticking up in the air, but the rest of the plane was completely destroyed and on fire.

“The flames were leaping really high in the air. It was horrendous. Some of the staff were really shaken up. One guy I saw was in a bad way, he had been in a car just a few yards away. He was very shaken.”

Pilots discussing the crash in online forums confirmed that the jet had been seen many times at Blackbushe. One suggested that it was not the first incident of its kind at Blackbushe. “A Beechcraft light jet just missed the fuel dump on the other side of the runway some years ago,” the pilot claimed.

It is the third time members of the Bin Laden family have been killed in a plane crash. Mohammed bin Laden, Osama’s father, was killed when his Beechcraft 18 crashed in Saudi Arabia in 1967 while on his way to marry his 23rd wife. Salem bin Laden, Osama’s half-brother, died in 1988 when his aircraft drifted into high-voltage power lines in San Antonio, Texas.