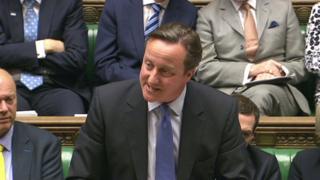 Intervening against the extremist forces who call themselves the Islamic State in Syria - it seemed impossible less than a month ago.

But in the weeks since the Paris attacks, the prospect of extending bombing strikes into Syria from Iraq has taken on a reluctant inevitability.

Planes may be dropping bombs by tonight.

But for the prime minister, with this, his third big foreign intervention - Libya, Iraq, now Syria - pulling together a wider plan to achieve real peace is a far more complex task, one he acknowledges the UK cannot complete on its own.

Yet by choosing action, that's a task he faces new pressure to help deliver.

For Labour too though the months ahead will be wracked with tensions that have been wound even tighter by the last few days' events.

The decision to take military action is never taken lightly.

But its political consequences could be heavy indeed.